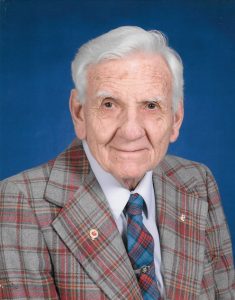 A longtime resident of Fairfield Bay, Edgar McCutcheon passed away on August 2nd, 2018 in Pennsylvania. Preceded in death by his parents Andrew and Myrtle, his son Andrew, his sister Florence and his beloved wife Margaret. He is survived by his son James (Nancy), daughter Eileen (James), five grandchildren, Melissa, Kathryn, Jeff, Paul, Jeffrey and 3 great grandchildren.
Edgar was born on March 13th, 1920 in Chicago, Illinois. Edgar learned his trade as an electrician at Pullman Tech. He enlisted in the US Navy during WWII and served as Chief Electronics Technician’s Mate on a sub tender at Midway Island installing the latest radar, sonar and radio equipment on the Navy’s submarines of the Pacific Fleet. After the war he returned to Chicago where he married the minister’s daughter, Margaret. Edgar had a long career as Chief Field Engineer for General Electric, traveling around the country fixing broken machine tools. He retired in 1983. Edgar loved photography, working in his home workshop, Boy Scouts and camping. Edgar always dreamed of someday living in a cabin in the woods, so after retirement he moved to Fairfield Bay.
He was active in the church and community. He loved working with the Kirk of the Hills men’s club. He built and installed podiums with PA systems for organizations throughout the Bay. He installed Life Line services in homes. He enjoyed leading the prayer and calling out numbers at the Senior Center. Edgar will be remembered as a tireless worker, always helpful and kind.
A memorial service will be held on Sunday October 14th at 2:30pm at Kirk of the Hills Presbyterian Church in Fairfield Bay followed by interment in the columbarium behind the church. All are welcome to attend. In lieu of flowers Edgar asked that donations be made to Habitat for Humanity.