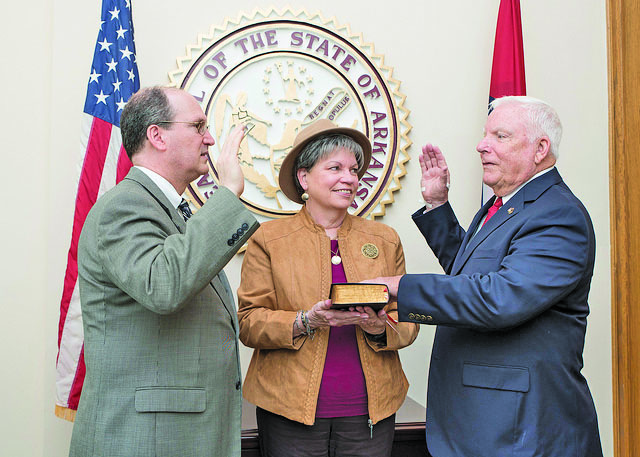 Pictured above is Arkansas Deputy Secretary of State, AJ Kelly, swearing in Ingram with his wife, Mary, holding the Bible.

Governor Asa Hutchinson recently appointed Colonel W. Ingram Philips, Fairfield Bay, to the Arkansas Veterans Commission.
Commissioner Philips, United States Army (Retired), will join 14 other appointees from around the state as the governor’s advisor on all veterans’ issues. His term of office is for 5 years.
Chaplain Philips entered the service from the University of Florida’s Reserve Officer Training Corps (ROTC) in 1961. His initial active duty was for two years as a lieutenant in the Armor Branch. He then served six years in the Florida Army National Guard as an Ordnance officer. Following seminary, he returned to active duty as a troop and hospital chaplain. His total service was 30 years and rank attained, Colonel. His awards and decorations were numerous and included the Legion of Merit and Bronze Star Medal. He achieved two campaign stars for combat service in the Persian Gulf War. He retired in 1997 from duties at U.S. Army Headquarters in Heidelberg, Germany, where he was director of chaplain operations for Europe and the Middle East.
With his wife, Mary (who is now a Van Buren County Justice of the Peace), Philips moved to the Bay in 2005. The commissioner is a four-term constable and Fairfield Bay Police Reserve. He is a life member of the Disabled American Veterans. He is also a life member of the Sons of the American Revolution and other heritage societies. His great-great-grandfather was a Georgia military surgeon during the Civil War. The Philips co-founded Care Cap Connections cancer project in 2006. To date, the volunteer mission has given away over 80,000 head scarves for women and girls undergoing chemotherapy.