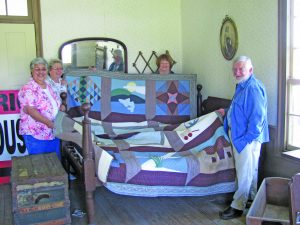 The Hill ‘N Hollow Quilters Guild gifted its Arkansas sesquicentennial quilt to the Baxter County Historical and Genealogical Society. The quilt has been on loan to the Donald W. Reynolds Library since 1994. The quilt was hand quilted by Guild members, designed and assembled in 1986 by then Guild members Joan Aitken, Mary McAuliff, Flo Malaney, Paula Vines, and life-time member Connie Lutes.
This attic window design tells the story of Arkansas and the Twin Lakes area. It depicts the State’s official tree, pine; the Ozark Mountains with a bass and the logo of the Guild; Little Rock block for the State Capital; a schoolhouse symbolizing the University of Arkansas; the State Flower, the apple blossom; the Crater of Diamonds at Murfreesboro; cotton and rice fields, along with a house block representing the historic Casey House in Mountain Home; and an outline of the State of Arkansas.
The Casey House, located on the Fairgrounds at the corner of Wade will be open for tours October 19 – 21, 2017, from 10 a.m. to 3 p.m. during the Guild’s Autumn in the Ozarks quilt show. The quilt and pictures of the Guild’s quilt shows held in the Casey House during the years 1984 – 1989 will be on display at that time.
This dog-trot style house was built in the 1850s by Colonel Randolph D. Casey, one of Mountain Home’s first citizens, and it is the oldest existing home in Mountain Home. The Casey House is maintained by the Baxter County Historical and Genealogical Society.