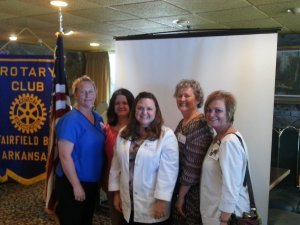 From right to left: Cheryl Golden, to her left is Bonnie Schrieber, the office manager for both clinics. Next is Keith Keech, an APRN originally from Mountain View who will be the Nurse Practitioner in Fairfield Bay. Next is Caitlin Worthing, the receptionist in Fairfield Bay. On the far left is Chandra Cathren our Fairfield Bay nurse LPN.

The new medical team replacing Dr.Sandra Young (who moved to Russellville) came to Rotary to tell us about all the changes. Cheryl Golden introduced herself and the Baptist staff.
Cheryl has been employed with the Baptist Health Family Clinic in Greers Ferry for over 13 years. She has worked alongside Dr. John Herring for the past 12 years. They see patients over the age of six months, for acute and chronic problems. They are now seeing patients in Fairfield Bay, at the old Boston Mountain Clinic location, in the Wyndham Building.
Currently, Cheryl is seeing patients in Fairfield Bay on Mondays, and Thursday and Friday mornings. Dr. Herring is seeing patients on Tuesdays, along with the new family nurse practitioner, Keitha Keach, who will be the full-time nurse practitioner in the Bay around the first of the year.
Cheryl is a native of northeastern Oklahoma, but has lived in Arkansas for over 20 years, and considers this area her home. She lives outside of Greers Ferry and enjoys the rural life, and has free-range chickens, a milk goat, honey bees, horses, and a few Longhorn cows.
She has four grown children and her husband has two grown children. Together, they have eight grandchildren, so far.
Cheryl graduated high school in Hulbert, Oklahoma, near Tahlequah, then worked and raised children for about 10 years, prior to starting nursing school. Her Associate’s degree in nursing came from Bacone College in Muskogee, OK in 1989. She worked full-time in the Adult Med-Surg Intensive Care Unit at Hillcrest Hospital in Tulsa while going to school in Tahlequah, OK to obtain her Bachelor’s degree in nursing from Northeastern State University in 1991. She then worked in Labor, Delivery, and Newborn Nursery, and Home Health, prior to moving to Arkansas, with her four children and their father in 1992. In 1993, she began working on her Master’s degree in nursing at UAMS in Little Rock, while living in Viola, Arkansas, and working as a Hospice nurse in West Plains, Missouri.
Following graduation from UAMS, she worked as a Family Nurse Practitioner in Huntsville, Arkansas, for four years, then relocated to Greers Ferry in 2001.