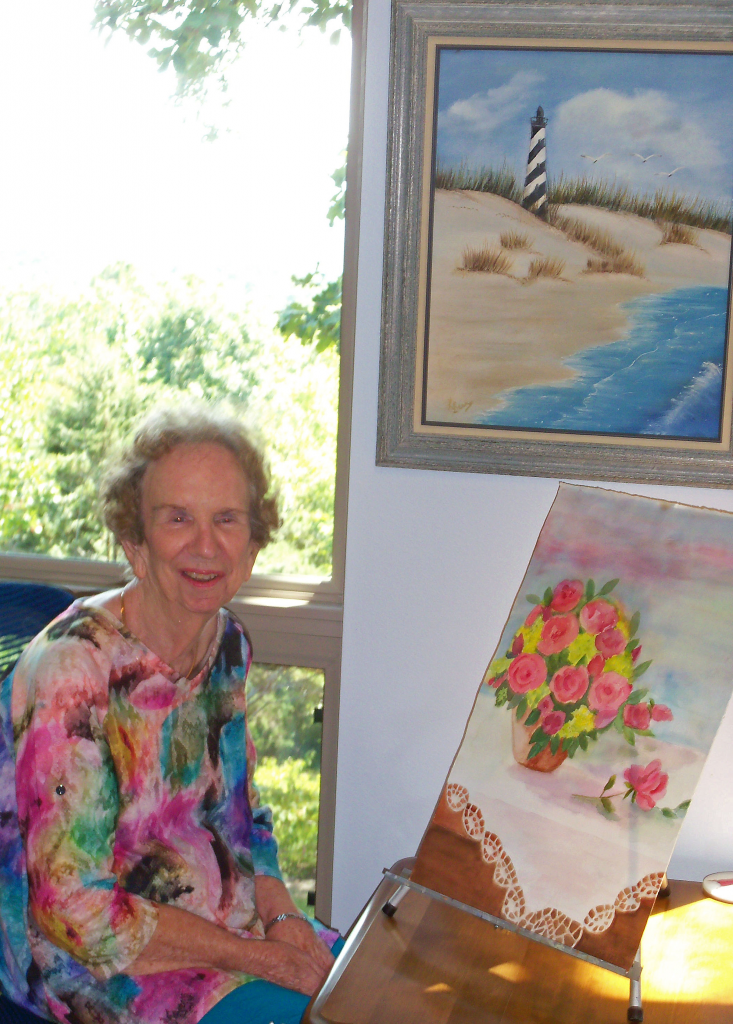 Shown in photo is Lea getting ready for the new exhibit in the NCA Art Gallery/ Fairfield Bay Conference Center Oct. 24

Lea Berry has had a fascinating life full of the arts. When she was given a paint set by her older brother’s girlfriend when she was just 5 years old, Lea Berry fell in love with the arts. Growing up the youngest of 6 children in North Carolina, she was surrounded by arts and crafts. Developing her creativity as she grew up, her love for the arts bloomed.
In 1956, working as a nurse in Virginia, she met her future husband, Russ Berry. They were married and moved to Arkansas in September of 1956, where he went to school at the U of A and she continued her nursing career. In 1960, they moved to Little Rock where they would reside for most of the next 38 years. During that time, Lea started taking art classes – dabbling in ceramics, toll painting, and other crafts for bazaars and other fund-raising events. She learned to mix paints through toll painting and was soon signed up to take oil painting classes. She painted with several groups taking different kinds of painting classes. She shared this love of the arts with her daughter Brenda and soon they were painting together.
They opened a business in the early 80s – “Berry Creative” where they travelled together and sold oil paintings at crafts fairs across Arkansas. In 1998, Russ and Lea retired to Fairfield Bay, Arkansas. Just before moving to the Bay, they attended a block party where she mentioned her love of the arts and soon-to-be new neighbor Bonnie Hookman invited her to join the Artist Group. She started painting with this and another group in Greers Ferry, AR as soon as she moved to Fairfield Bay. During this time, she participated with other artists in opening an Arts and Crafts store where they sold their works. She also was introduced to the North Central Arkanas Foundation of the Arts & Education (NCAFA&E) and was instantly enthralled. She joined the board, worked her way to President of the foundation, and has been actively working for NCAFA&E and the Arts in Northern Arkansas ever since. Lea Berry and the members of NCAFA&E have brought numerous artists to the local area for concerts, had children’s programs in the local schools, and helped to get local artist’s works shown at different places in the area – all the while keeping up with her own painting and branching out to acrylics and watercolors. Lea started out painting beautiful seascapes reminiscent of her home state of North Carolina but also paints colorful flowers and birds to match her view outside her home in Arkansas.
Now Lea is stepping down as President of NCAFA&E, but the arts are still in her blood. She will continue to paint and help to raise money for NCAFA&E but also wants to travel so she can take more pictures of different places for future paintings.
About the North Central Arkansas (NCA) Art Gallery
The North Central Arkansas (NCA) Art Gallery’s mission is to bring quality Fine Art to our community with good taste & family values. The artists are professionals as well as emerging new artists. The artwork is open to all Artist and chosen by a selection committee under the direction of Coordinator, Charlotte Rierson. Art Gallery hours are Mon. – Fri., 9:00-4:00 (unless special events then hours are extended). The viewing of the Art is open & free of charge to the public. All art is available for purchase.