Each month we feature an artist to showcase.

The month of May feature Artist is Joyce Burns 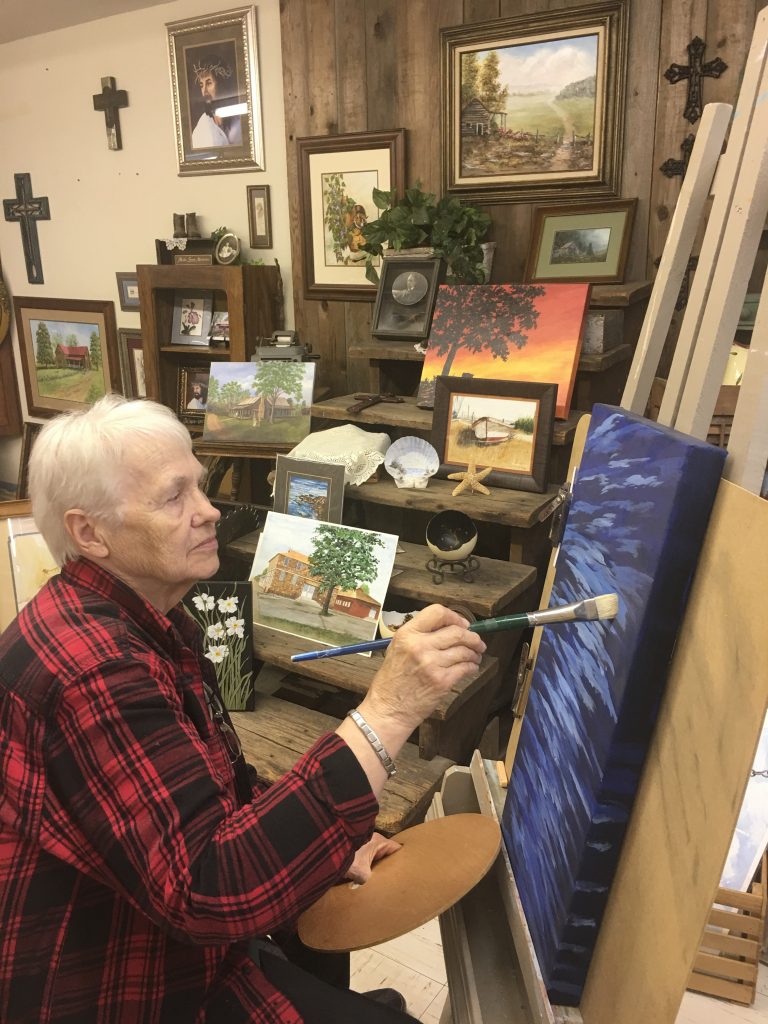 Joyce Burns used to be scared to draw anything, but now her artwork hangs in many states and she has sent several works to Germany, France, England and Japan. She is an artist in high demand and an art instructor.

Joyce was living in Bakersfield, California where she grew up when her husband was involved in a truck accident. “Our whole life changed.” He could not work for about two years. The doctor said she needed to find something for her to do for fun and to get her away for a little while.

One day a group of friends took her for a ride. They drove all over town and eventually they stopped at a building and told Joyce to go in and ask for a lady by the name of Marta Nelson, who turned out to be an art teacher. Her friends had purchased all of the paints and brushes that she would need to learn to paint and had it all set up and a chair with her name on it. “No one had ever done anything so wonderful.”

Her first painting was a tiny barn with a fence in front of it and a rooster sitting on the fence that was three times as large as the barn. Now she says it was awful. At the time she thought she had painted a wonderful masterpiece.

She said she learned so many things from that first teacher and still uses much of it in her classes. One of the most important things was that she never gives criticism without pointing out some of the good things in the painting.

Joyce and her husband James and their two sons, James and Tim, moved to Scotland, Arkansas in 1978. It was not easy moving from a large town to a very small and rural town and it was not long until she was bored because she had not found anyone with the same interests.  She caned chairs, made baskets, restored old furniture and old picture frames, and she painted pictures.

In 1982, her husband suggested that she invited some people to their home to paint and maybe start a painting club. She invited 7 people and 14 showed up. It grew to 27 by the next meeting. These people were not artists – yet – but they wanted to learn. Joyce had not been painting very long and she was afraid they would soon know as much as she did, but they taught her something each class. One thing Joyce learned from the first session was, “don’t have everyone paint the same thing.” She let each one choose the picture, the medium, and the subject they want to paint. They each learn something about all of the mediums and are not afraid to try new ones. That is how she learned.

She said she was amazed. She gave them a little paint and some brushes and each time she thought “it will not be long until they know everything that I know.” They told everyone they knew and it was not long until she was giving classes. That was 36 years ago. She still loves to see people learn something new and be able to express their own style, not just to follow rules. She said that she had to learn to see before she could get it right.

When Joyce moved to Scotland, the first thing she wanted to paint was the town of Scotland. She used two old photos from 1949 and put them together and made a long painting of the whole town. She chose to paint this one with acrylics. Now, Joyce works in most mediums and she makes prints from most of her paintings that are not commissions. She has painted 8 old historical sites around Van Buren County.

She just finished painting the old rock school building that had to be demolished so Clinton Schools could build the much needed Gym and Auditorium. The prints of this painting will be available soon.

Joyce came here and did not know anyone. Now she can not imagine living any where else.  She still loves the area, the many friends and neighbors.  She said this is home and she feels that she belongs.