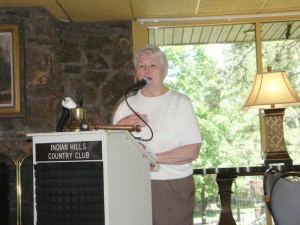 Judy Behrens talked to us at Rotary about a novel tax proposal. Judy has lived in Conway for 30 years. She calls herself a damn Yankee who came down south and stayed. Judy has a little vacation cabin at the lake at Edgemont and loves it.

Originally Judy is from Rockford Ill has three children, four grandchildren, one great-grandchild, all smart and beautiful of course. Judy provides in-home care for seniors.

Here is the tax plan called “the fair tax plan” Judy talked about. It consists of 4 attractive features: 1. No more IRS incomprehensible tax code and no more IRS tax returns. 2. Everybody pays a 23% sales tax on whatever is consumed 3. No more federal withholding, you keep your whole paycheck 4. Some lower income people would get a refund commensurate with a poverty level income The last point is some compensation for the distortion this scheme would create.

The plan claims it would eliminate income tax, create jobs, raise real wages and save 400 billion by eliminating the IRS bureaucracy. It would add trillions of US and foreign dollars to our economy, lowers product costs and grow the economy. Such is the proposal for the new tax scheme. Sound inviting, doesn’t it?

I am not an economist, even if I have a son who is, but with some simple common sense I can logically conclude there are some obvious shortcomings: Americans with limited income spend most of their earnings on consumables and thus would pay 23% taxes on just about their entire income. Richer Americans spend a much smaller fraction of their income on consumables and thus get away with much smaller tax burden on their overall income. If that is called fair I need to rethink what is meant by fairness.