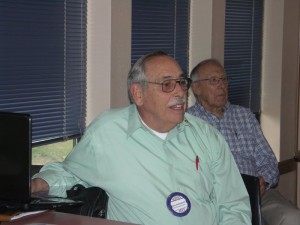 Every once in a while one of our own Rotary members talks to us at our luncheon meeting. This time it was Tom Schueren, our former mayor of Fairfield Bay. Tom gets 2nd graders to learn about Rotary and does some fun projects with young students. Here is what Tom said:

“The Fairfield Bay Rotary Club continued the Andy and Elmer Literacy program this year with the Shirley 2nd Graders and expanded the program to include Greers Ferry West Side 2nd graders.

The Andy and Elmer program teaches the Rotary’s “Four Way Test” which is a motto that Rotary members attempt to live by.

Andy & Elmer’s Apple Dumpling Adventure is the story of a young entrepreneur who starts an apple dumpling business. He uses apples from a neighbor’s tree, with the guidance of a mysterious voice, conveying the Four-Way Test. He realizes that he can’t call the apple dumplings “Andy’s apple dumplings” because the apples belong to a neighbor. The voice helps him realize it isn’t fair as the apples belong to Elmer his neighbor. Andy forms a partnership with Elmer and again the voice helps him realize “it is fair to all concerned” and “builds a great friendship.”

The two men then engage another friend, Betsy, to transport the Apple Dumplings to market. The voice again helps them realize the 4th element being “beneficial to all concerned.” Andy turns his venture into a wonderful success and makes friends along the way. There is a coloring book for the student that follows the story to reinforce the elements of the four way test. Club members read a chapter a week to the students and the teachers incorporates the elements of the core curriculum into a program.

During the program, the students sample a variety of apple types such as Fuji, Jazz, and Gala. They then graph the results and the class decides which apples taste the best by incorporating math principals. At the end of the program the high school Home Economics teachers, and several of their students assist the 2nd graders in making apple dumplings. They then proceed to devour their creations.

This is the fourth year the club has implemented the program at the Shirley Elementary school and this year we have added West Side Elementary. Last year, the Shirley 2nd grade class assisted the club in planting two apple trees, with the intent that, as the trees mature, the students will pick the apples to make the dumplings. It is hoped that, as the class of 2022 and future 2nd graders continues their education they will have a fond memory of planting and caring for the trees and continue to foster the principles of the Four Way Test as life lessons. The club has gained national recognition for its program and is being featured on the Andy and Elmer Website http://www.andyandelmer.com/testimonials.html.”

Caring involvement with young students has important positive effects. The children feel the love and attention received which has a positive effect on their learning skills. I came across an article which discussed problems with children adopted from Romania. That government encouraged Romanian citizens to have many children. The country was however so poor that many families simply could not afford to raise their children. The state took over and put several hundred thousand children in orphanages, then encouraged the world to adopt them. These children had suffered severe neglect; physical, emotional and mental.

Upon adoption, these children were tested in the US for mental and emotional stability. The findings were sad; their IQ was far below average. Perhaps years of loving care may erase this damage. I am making this point to emphasize the importance of Tom’s activities mentioned above.