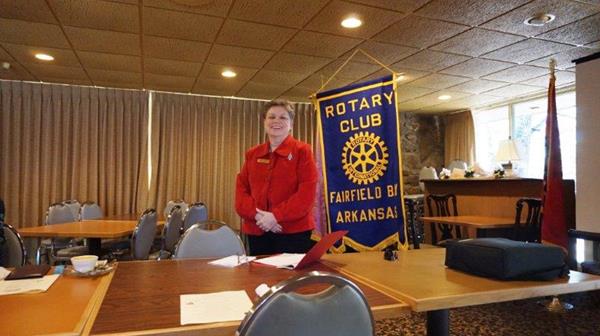 This time we had the honor of listening to Justice of the Peace, Mary Philips. Mary sure had a busy life full of accomplishments.
Mary was born in Limington, Hampshire, England…….of Arkansan parents. she was raised in Texarkana, East Texas, got her education in BSED Texas Tech Univ., MS Texas A & M
Mary has been married to Ingram (met in Germany) for 27 years……they share 3 children and 1 grand-daughter. Mary taught school for 30 years, 11 different grade levels (Texas, Arizona, Department of Defense in Germany)
Mary founded the “ Care Cap Connections.” a non-profit making caps for chemo patients. It is in its 10th year, hoping to reach 70,000 caps by Christmas 2016.
Mary is one of 2007’s KARK Community Service Award Winners, recipient of citations from the Arkansas Senate and House of Representatives for her volunteer work with “Care Caps” and was elected Justice of the Peace in 2014. She is on various committees: County Roads, Personnel Policies, Economic Development, Buildings and Grounds and will represent the Van Buren County JPs at the Association of AR Counties (AAC) Meetings beginning 2016. This will be attended by the Community Development Institute (year 1) at UCA and the Mid-South Basic Economic Development Course.
Mary moved to FFB in 2005. This is the longest she has ever lived in the same house! To move, she says she would have to drag her “view” with her.
Mary visited the Rotary Club on December 9. She was asked to speak about what it was like to be a Justice. She said that Van Buren County is a small county and has the minimum number of Justices (which is 9). Larger counties can have up to 15.
They sit on the Quorum Court presided over by the County Judge. Justices are the Legislative Branch of the county and they hold the purse strings.
The Quorum Court meets once a month on the third Thursday in Clinton in an open meeting.
The Quorum Court is similar to other states, County Commission or Board of Supervisors.
Each Justice sits on at least two committees. Mrs. Philips sits on the Economic Development Committee, the County Roads Committee and a special, temporary, Personnel Policy Committee currently updating and improving the county personnel policy.
Justices receive their information for the Quorum Court by e-mail about a week ahead, so they can ask questions about the ordinances (new county laws). These questions must go to the persons or boards involved in the ordinance. Justices are not to discuss the ordinances between themselves outside of the Quorum Court because the Court must be an open meeting.
JP Philips has been busy this year visiting county agencies such as: the county jail and animal control, two of the three schools, the offices in the county annex and courthouse, ridden the county roads, watched the road crew work, attended a hospital construction meeting and toured the hospital, and tried to meet with various county workers.
She also attended the Mid South Basic Economic Course in Little Rock as well as UCA’s Community Development Institute Year 1.
JP Philips also discussed the recent article in The Voice. There was a proposed ordinance to have a voluntary tax for the County Library on the Tax Roll. There is already a mandatory tax for the Library as well as the school, Fairfield Bay, County General, Hospital Maintenance, and city and county roads. The Library has a building that they are selling and Friends of the Library. Justice Philips questioned why the Library was being favored and that this might open the door for other groups to put forth their own voluntary tax, when people wishing to give to any of the worthy groups could just give a donation. Hers was the only “no “vote.
Mrs. Philips reported to the group that her non-profit cancer project, Care Cap Connections, is almost at the 70,000 caps mark in their 10th year. They have been blessed with a new trailer,
Ebenezer II, which is tall enough to stand up in and able to hold all that is needed. With her husband, Ingram, and wonderful volunteers, next year will be even better.