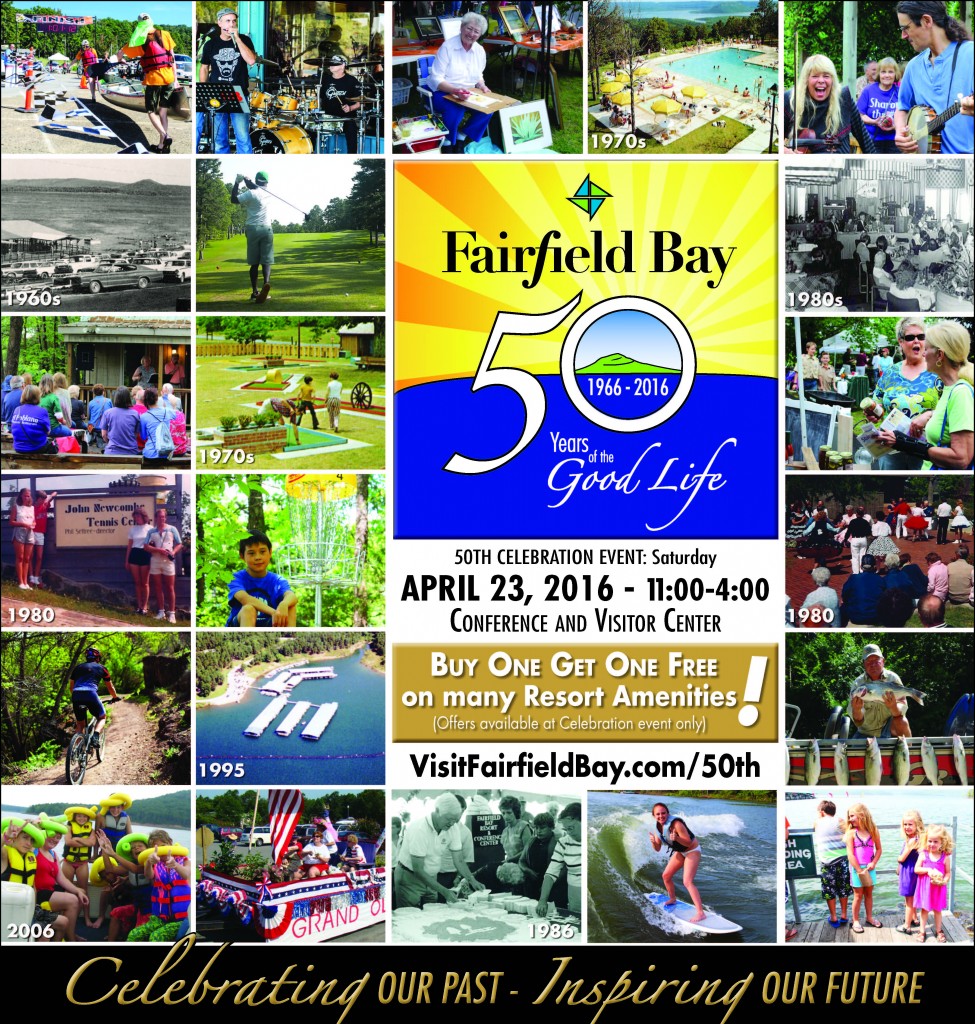 Celebrating the Past and Inspiring the Future

“As we look back on our heritage of the past 50 years, what shines so brightly is the good life we have been given here in Fairfield Bay. Every day, we experience and share in the blessings of this beautiful community: the trees, the wildlife, the lake and most importantly – each other. May the next 50 be even more glorious.” Mayor Paul Wellenberger

For 50 years, Fairfield Bay has offered a pristine lake, incredible Ozark Mountain views and a recreational lifestyle with all the amenities of a world-class resort without the crowd.

Fairfield Bay will celebrate 50 years of the good life with a commemorative event on April 23rd from 11 a.m. to 4 p.m. at the Conference and Visitor Center. Be part of this area’s inspiring 50 years; hear stories and reflections, see the town’s rising in photo and song, and smile at some unique and fun memorabilia for a city that shaped the adventures and mystique of beautiful Greers Ferry Lake. Meet some of our state’s top dignitaries, enjoy the music, champagne toast and save some time for a cruise around this Ozark Mountain Lake. For a schedule of events, go to VisitFairfieldBay.com/50th.

The Dream Begins.
Building a recreational outdoor resort and retirement community was the dream of real-estate developer, C. Randolph Warner, Neil Simonson, and Jake Jacobus, and 50 years ago it became a reality. Fairfield Bay began with the purchase of 3,000 acres on the banks of the pristine Greers Ferry Lake.

In January 1966, the marina was built and Fairfield Bay was well on its way to becoming one of most popular retirement communities in Arkansas.

In the early 70s, the marina was the center of most of the social activities in the community, including Arkansas’ first National Trail on Sugar Loaf Mountain – an island rising out of Greers Ferry Lake. And the city quickly grew from there with two premiere 18 hole golf courses, recreational areas and a tennis complex that boasts numerous USTA championships. The Conference Center was built in 1972, and become a popular visitor destination.

Today, Fairfield Bay has twice been selected as a “City of Distinction”, heralded as the safest city in which to live and one of the most popular resorts in the state. Fairfield Bay has nine signature events each year, including a disc golf tournament in April; Bloomin’ in the Bay along with Blues & BBQ in the Bay in May; Surf the Bay in June; Fourth of July celebration; Boati Gras in August; Paddle Battle and BayFest in September; Oktoberfest along with Storyfest in October and Festival of Trees in December.

Fairfield Bay continues to add new activities and destinations of interest, such as enhanced trails systems, recreation facilities, arts and entertainment culture – while never losing sight of what makes this charming community a place of peaceful days and happy memories all year long. “Come experience a piece of what we live each and every day,” says Mayor Paul Wellenberger. “I’ve got the best job around – and I can shout from one of our many mountain tops, ‘This is the Good Life’, and you can have that, too!”