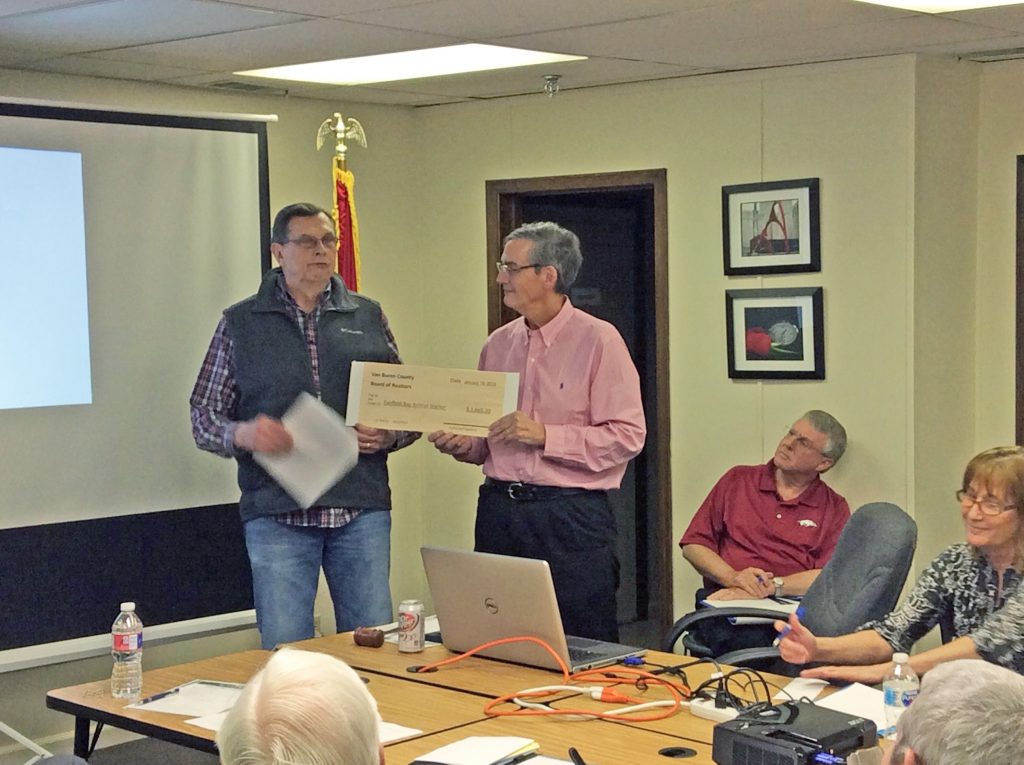 Councilman, Robert Otis, presents  mayor Wellenberger with $1,665 check from the Van Buren County Board of Realtors
for the Fairfield bay Animal Shelter.

The Fairfield Bay City Council held their meeting on Monday, March 19 in the City office. During the meeting two Ordinances 2018-03, an ordinance to Amend the Energy Code Chapter 11.32 of the Municipal Code. This ordinance is important to update with regards to the new construction of the upcoming Cobblestone Inn and Suites. ordinance 2018-04, an ordinance to Amend title 14 of the Municipal Code, Creating Zoning Code PPN-1to Provide a Planned Pocket Neighborhood for the Tiny Homes. This ordinance was important in order to provide legal zoning requirements to built a Tiny Home tract in the mobile home park at the west entrance of Fairfield Bay. Both ordinances are available for review at the City office in the mall.

Rose Owen, Recorder/Treasurer presented her report stating that City and County tax receipts were up again. The financial balance of the City at the end of February shows the General Fund balance of $81800K, Street Funds, $139,700K and Franchise Fee revenue is $28,600K.

Police Dept.: several theft cases have been solved and two people are being charged with seven counts of residential burglary and thefts. The Bicycle Safety program has been set for Saturday, May 19 and the next drug-takeback is scheduled for Saturday, April 28.

Fire Dept.: Leo Brandmeyer, Fire Chief, stated that a full scale drill for a simulated fire is being conducted at Mountain Ridge timeshares on Tuesday, March 27. Plans have been coordinated with Tommy Reedy with Wyndham Resorts. Inspections of City owned buildings have been conducted and occupancy loads have been calculated for local restaurants.

EMS: Andrea Notz, EMS Captain, stated that Will Griffin attended the Transition Summit at the Rockefeller Institute at Petit jean State Park regarding the Fairfield Bay EMT training site.The state wants to use Fairfield bay EMS to provide training for local high schools seniors and Arkansas Rehabilitation is working on grants to supply grant funding. Andrea has met with Andy Ball and Ryan Kibler from Medic One to discuss coverage issues. Fairfield Bay has gone back to 24 hour coverage for the volunteers and this seems to be working well.

A&P Commission: John Calaway, A&P President, stated that Ramon Hernandez, owner of El Pablano, is now a member of the A&P Commission. Fairfield Bay  is now a member of the Monarch City USA Organization. Fairfield Bay is the 1st Monarch City (a butterfly friendly community) in Arkansas. The commission has agreed to pay for the Billboard lease on Hwy 65. The Commission has joined the Arkansas Festival Events Association. With a premium membership this allows the commission to post 10 events for the Bay. Posters and banners are being placed in key locations promoting the hotel and other proactive actions are being evaluated to promote the hotel.

Councilman, Robert Otis, presented a check to Mayor Wellenberger for $1,665 from food proceeds  during Oktoberfest last year in the Bay from the Van Buren County Board of Realtors.