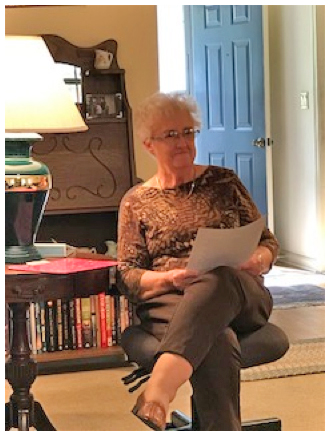 Davis Special Questers met October 16 at the home of Elda Gerndt. She served a fall apple walnut cake. Bonnie Tatom and Fran Schroder reported on the fall council meeting they attended at Queen Willhelmina State Park. Highlights of the festival were a mystery theater and a costume party. Chapter members discussed plans for the state convention. It will be held in Fairfield Bay April 6-7, 2018. We welcomed two new members. Judy Walthal and Susie Zimbelman. Also, we were happy to see former member Celle Newsome. The program, presented by Elda was a book review of “Mamie Ozark Mountain Girl of Courage.” The book was written by Mamie’s son Carl Barger. Mamie was 15 years old when she accepted a proposal of marriage from Edward at the Indian Rock Cave. He worked in a sawmill and also farmed. Mamie was a hard worker. She gave birth to 11 children. When Edward had to be away for a job she ran the farm. She planted a corn crop and with the proceeds bought a milk cow, pigs, and shoes for her children. When Greers Ferry Lake was formed, they lost 80 acres of good farmland. Mamie valued her family above all else. She had courage, strength, and faith.