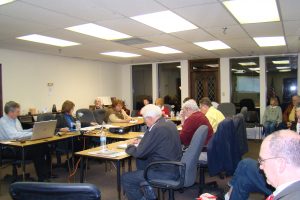 On Monday, February 13, 2017, Mayor, Wellenberger, read the nine page ordinance which outlines the process of obtaining a Transmission Tower Use Permit and the definition of a Transmission Tower.
The purpose of the ordinance is the clarify the requirements for placing a transmission tower inside the City limits and create a new form of a special use permit for an extended period of time and to define what type of transmission tower can be erected within the City limits and it’s appearance.
The ordinance also gives the applicant the opportunity to apply and convert the Special Use Permit to a Transmission Tower Use permit and pay a conversion fee of $2,500.
A motion was carried to accept the ordinance as amended with the date change from January to February 13, 2017. A motion to suspend the rules and continue with the second and third reading, title only, was passed. A motion to adopt the ordinance was accepted and passed. Ordinance 2017-02 will be available to the public for review at the City office.
Next on the agenda was the reading of the ordinance for the Health and Safety of Rental Property. Mayor, Wellenberger, read the five page ordinance and due to some discrepancies within the title and the within the body of the ordinance, a motion was passed to table for continued discussion at the next work session scheduled for Monday, February 27, 2017.

In other council news:

• The 2018 Urban Deer Hunt was approved.
• The Legislative Audit found that the City offices and their departments were in compliance with Arkansas fiscal and financial laws. Congratulations was given to Rosie and the department heads for a job well done.
• Beginning next week, Dallas, the Code Enforcement Officer, will begin writing up lots in the mobile park area that violate the City codes.
• The 1st installment of payments have been received from Petit Jean Electric and First Electric for the Franchise Fee of about $11,000.
• The Arkansas Department of Health and North Arkansas University have agreed to make FFB EMS an education facility for 2017.
• Mayor Wellenberg announced that starting Thursday, his Faith Based Initiative will kick off. Watch for more information on this.
• The new police cars have arrived and are being setup for service with decals, lights and all the necessary equipment.
• The FFB Animal Shelter has purchased a much needed van for transport of animals and everday use.
• Mayor Wellenberger layed out plans to use the remaining 280k instreet bond money for 2017-2018 which must be used by May 31, 2018.
• The street Aid request to pave Lost Creek has been denied, however, the request is high on the list for 2018. Remaining Street Aid requests had to be fulfilled first.
• The City will be evaluating a Modified Aggregate Quick System (MAQS) paving materials that would be less expensive than 2 inch asphalt.
• Any major paving of Woodlawn down to Grand Isle will be delayed until Osage Point construction is complete.
• Recovery of the money order machine stolen from the Post Office this past weekend, stopped a potential lose of $1.6 million in money orders.