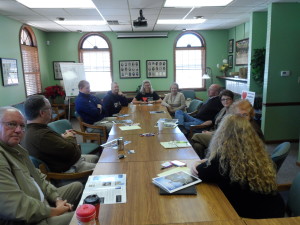 Six citizens of Clinton, Arkansas, representing city and county government, small businesses and economic development, toured the city of Harrison on a fact-finding mission for their downtown revitalization initiative, which has already begun in Clinton under the umbrella name of We Love VBC.

The group met with members of Harrison’s C.O.R.E., which was formed in 2009 by retired Congressman, John Paul Hammerschmidt, to engage their community in revitalizing the heart of Harrison.

The first meeting of the day was held at the Harrison Chamber of Commerce where the group heard about the formation of CORE and received details of the ten track strategic plan that is the guideline for their revitalization efforts. Harrison’s plan includes design development and financing, programs and events, infrastructure, branding and marketing, art and atmosphere, commemoration and preservation, housing, destination attractions and advocacy and oversight.

“Harrison’s organization is impressive and all-encompassing, covering just about any facet of their district’s development. At first it looks overwhelming, but the way they organized their efforts into ‘tracks’ makes success for any size city completely attainable, even for a city the size of Clinton. Being involved with Mark Peterson and Breakthrough Solutions has helped us already and will continue to do so,” said Wendy Russ of Clinton City Council.

Layne Ragsdale, facilitator of the CORE Steering Committee, mentioned many of the advantages of partnering with Mark Peterson, Professor of Community Development of the University of Arkansas Cooperative Extension Service Breakthrough Solutions Program. “The focus of this visioning process has brought to bear the untapped potential of the CORE District and has resulted in tangible improvements and momentum.”

Such partnerships not only facilitate organizational benefits but also strategic alliances with people like Ed Levy, principal architect for Cromwell Architects in Little Rock, who helped CORE with their visioning. Levy is slated to visit Clinton and tour the area in January with local officials then make a presentation open to the public later that same night.

After the initial meeting, the delegation was lead on a tour of Harrison that showed various details of their ten tracks in action. Topics covered were the history of how the CORE district was organized, how it gained momentum, the dynamics of how the group works together and the benefits of local organizations partnering together to achieve a common goal.

And, indeed, this was demonstrated beautifully later, when the group met at the historic 1929 Hotel Seville for more informational sessions. Present were the Mayor of Harrison, the Boone County Judge, members of the Chamber of Commerce and others representing various business interests, housing and several other “tracks.” Presenters discussed infrastructure, like the downtown’s “road diet.” housing development in the downtown area and current efforts to develop a “small business university.”

Kitty Murdock, Director of Clinton Business Revitalization Association (CBRA) found the visit inspiring. She said, “Because our initiative covers a smaller area, our challenges are far less than Harrison’s during this first phase. The visit, for me, reaffirmed that we are headed in the right direction – keeping everyone involved is vital. One thing that impressed me is that even though their steering committee has been at this for many years, they are still participating and still enthusiastic, as if the idea were fresh. You can tell the team has great chemistry and a beautiful attitude despite any setbacks they may have had.”

Before leaving to head back to Clinton, County Judge Roger Hooper addressed the group. “We are grateful you took so many hours out of your day to show us what you’ve done in Harrison. We are excited about our initiative for Clinton and Van Buren County and look forward to experiencing the kind of success you have achieved here.”

‘We Love VBC’ will be hosting two public meetings in January. One is “Stake Your Claim in Clinton” and will cover the details of Phase One of the revitalization efforts. It will be held January 14 at the community room of Petit Jean Electric at 5:15 p.m. with a light supper being served and the meeting commencing at 6 p.m. The second meeting is tentatively scheduled for January 28 and the main speaker will be Ed Levy from Cromwell Architects.

More information about the revitalization initiative and all the contact numbers of organizers can be found at: www.welovevbc.com