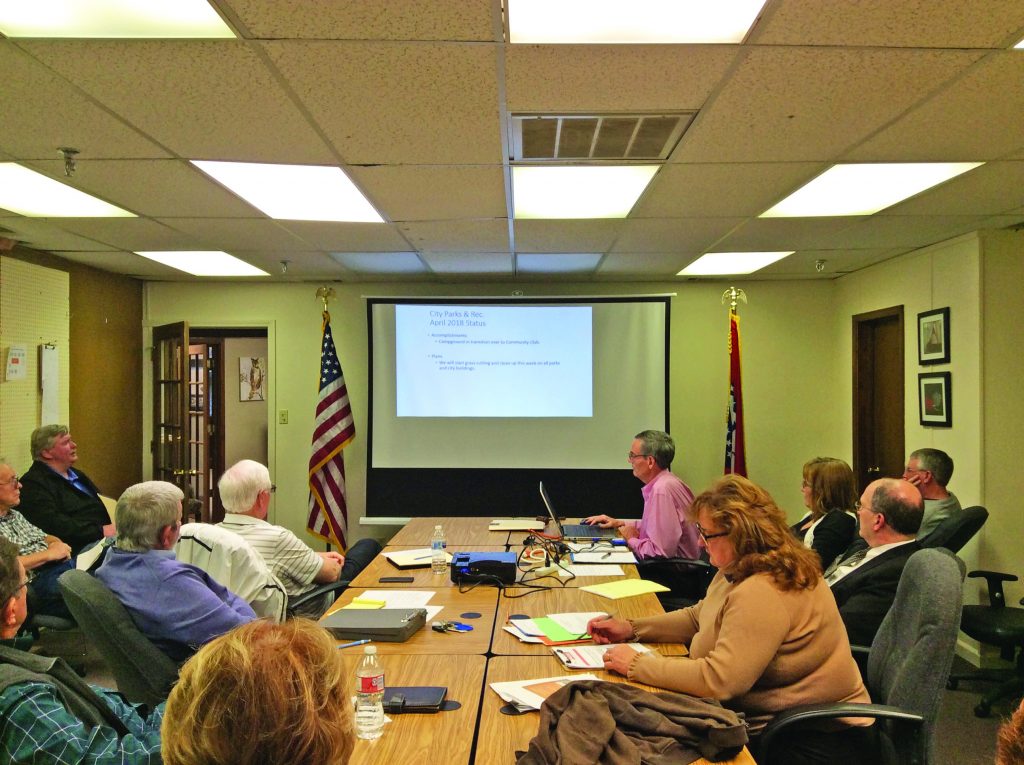 The Fairfield Bay City Council held their regular scheduled meeting on Monday, April 9 in the City office with a full Quorum of members. The minutes from the March meeting was approved with an amended action that Councilman, Robert Otis, abstained from the Tiny Homes Ordinance instead of voting No. The Treasurers report showed a reduction in the General Funds of 27K for improvements to the Animal Shelter, new stage lighting at the Conference Center and a removal of a mobile home due to being destroyed in a fire. Councilman, Linda Duncan requested the City look into recovering those funds from insurance.

In new business, Mayor Wellenberger shared a detailed map of the planned Indian House Rock Trail that would replace the stairs going to the Indian Rock Cave. The trail would be funded by one of two types of grants: Federal-Aid Recreational Trails Program Funds or the Federal-Aid Transportation Alternatives Program Funds. Both grants are a 80% federal participation with 20% local match. Both options were read and passed by the council as resolutions.

Police Chief David Burnett discussed the recent breaking and how they have been resolved with the arrest of the Harris brothers. Councilmen, John Foster was concerned about the lack of information in the paper about the break-ins giving the public awareness. Chief Burnett stated that without jeopardizing the investigation when break-ins occur, he is more than willing to find a solution to inform the public. The bicycle Safety program is scheduled for May 19 and have received commitments from some incredible organizations to meet the needs. The next drug take-back is scheduled for Saturday, April 28.

Fire Chief, Leo Brandmeyer reported 27 calls for the month of March. The total number of calls this year is 58 well ahead of the number this time last year. The department is looking at new grant opportunities for protective clothing exceeding costs of 21K needed to be in compliance.

EMS Captain, Andrea Notz, reported the squad now has 11 certified Emergency Medical responders and all volunteers are now certified as EMTs, EMR and CEVOs. Helicopter transports have increased dramatically to 20 times so far compared to 2 last year. Efforts continue to work with Medic One on coverage issues. The contract with Medic One has been signed and the Shirley station is currently being setup to help with needed coverage.

Mayor Wellenberger, shared photos of the work that has been done at the Animal Shelter. The quarantine area has completely been remodeled and the ceiling after many years of trying has been lowered to help reduce energy costs. Wellenberger stated that the relationship with the shelter has been great since the City has assumed responsibilities of staff and the APL is now focused on fundraising.

Dr. Catherine Swift presented her report on the Community Education Center stating exciting things are happening with the Indian Rock Cave (Edgemont Shelter) and the Fairfield Bay Heritage District. She is working with Taylor Productions and Ozark Gateway on Public Relations. She is currently working on educational materials on the path of Hernon De Soto and his travels through Arkansas. Councilmen, Otis was very commendable on the Sterling Scholar Speakers that Dr. Swift has brought to the center.

Conference Center Manager, Willa Thompson, presented her report on the events for the Month of March and very excited about the upcoming events with the Hotel coming into the picture. Bookings are already taking place for 2019.

The next City Council meeting will be held on May 14, 2018 in the City office Conference room. The meeting is open to the public.