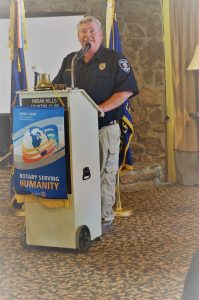 The Fairfield Bay Rotary Club recently welcomed David Burnett, Fairfield Bay Chief of Police, as a guest speaker. Chief Burnett is a proponent of community policing and making a difference in our community. He has been the Chief of Police for almost two years and has 25 years of law enforcement experience.
Chief Burnett shared information on the opportunity to participate in a “take back” program for prescription and over the counter medications that are no longer needed. The Drug Enforcement Agency (DEA) initiated the medications “take back” initiative in 2010 with two goals. The first goal is to provide a safe, convenient, and responsible means of disposing of prescription and over the counter medication. Through the initiative, the DEA has collected 8,1303,000 pounds of prescription medicine since the program was initiated. The second goal is to educate the public about the potential for abuse of medications. Chief Burnett stressed the importance of safely disposing of medications that are no longer needed and how the “take back” program keeps the drugs away from potential drug users.
Fairfield Bay participates in the “take back” initiative and collected fifty pounds of prescription medication in 2016. During the “take back” opportunity in April, 2017, thirty-two pounds of drugs were collected. Participating in the program is important to protect our local community. According to Chief Burnett, there were four cases last year with eight people involved in using heroin in our community. This year, there have been two deaths attributed to drug overdose in Fairfield Bay.
The next “take back” opportunity is on October 28, 2017 from 10 a.m. to 2 p.m. at the Fairfield Bay Department of Public Safety located at 101 Little Rock Drive. There is also a box available at any time that same location. Call the Fairfield Bay Department of Public Safety at (501) 884-6005 for additional information.