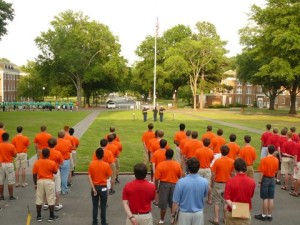 American Legion and Auxilary Post 333 of Fairfield Bay sent 4 boys and 5 girls from Shirley, Greers Ferry, and Clinton High Schools to Boys/Girls State, May 26-31, this year. UCA Conway and Harding University were the locations. The event was started in Illinois in 1935. They learn rights of citizenship, patriotism, and social lessons thru the week. There were 560 boys from across the state this year. The boys were divided into 6 groups. Election of county, district, and state officials will be done by the end of the week. A “Governor” is elected in the State House in Little Rock.  The free time is spent with others from around the state in Band, Choir, Basketball and other interest to the boys. This is a great experiance and long lasting friendships are formed. Girls State follows the same events. The picture is the end of the day, Taps and lowering of the flag. PIcture by George Gerndt. Submitted by Richard Pierce Commander Post 333