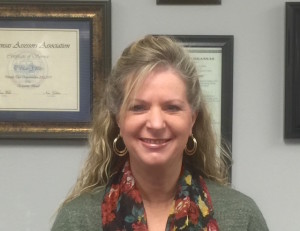 Trina Jones announced that she will seek the Democratic nomination for a sixth term as
Van Buren County Assessor.
She served 4 years as District Two Representative on the Arkansas Assessors Association Executive Board. She served 2 years as the representative for the Arkansas Assessors on the State Legislative Committee. She has been a member of the International Association of Assessing Officers since 2007.
Jones was the recipient of the “Outstanding Assessor Award” in 2009 and 2011, given by the Arkansas Chapter of IAAO.
Jones is a graduate of Clinton High School and is a life-long resident of Van Buren County. She has been married to Ronnie Jones of Shirley for 31 years. They have three grown children: Megan, Whitne, and Jeremy, one grandson Harper Holland, and are expecting two new grandsons in December this year.
Jones is a member of the Pleasant Valley Baptist Church in Shirley where she is currently serving her 4th year as Church Treasurer and previously served as Church Clerk for 8 years.
“I feel honored and blessed to be working for the citizens of Van Buren County and look forward to the opportunity to continue to serve as County Assessor,” Jones states.
She would like to say, “Thank you” and “God Bless you all,” to the citizens of
Van Buren County for their continued support and understanding.