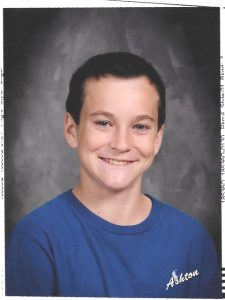 Ashton Klepko, who is 14 years old and attends West Side High School in Greers Ferry, has grown up in this beautiful community of Fairfield Bay. A member of Fairfield Bay Boy Scout troop 401 for the past three years, Ashton is a Life Scout currently working toward achieving Eagle Rank. Ashton is the son of Amber McIntosh, step-son of John McIntosh and brother of Alex Klepko. Alex Klepko’s Eagle Project was to landscape the Fairfield Bay Conference Center.

After meeting with Rocky Nickles, General Manager of the Fairfield Bay Community Club, Ashton chose to clean up and improve the Indian Rock Cave Trail, for his Eagle Scout Project. There are five hiking trails in Fairfield Bay and the most popular is the Indian Rock Cave Trail. It was also the first trail in Fairfield Bay. Over the years, much vegetation has intruded onto the trail and there is a lack of signage throughout, which can lead hikers off the path. Ashton’s plan is to mark the trail and clear the overgrowth.

The Questers organization, has informed Ashton that the nearly fifty trees that were identified and marked by Bob Hartmann and Mary Alice Beer several years ago are missing their numbers. Ashton will also re-identify some of those trees with the missing numbers. Ashton plans to design a brochure, which will include a trail map and a list of the trees identified.

Ashton is asking for monetary donations for signage on the trail, tree identification markers, and any other supplies needed. Along with donations, volunteers are needed to help clear the trail. The trail workday is planned for October 21st at 9 o’clock in the morning. Bring any tools that will help clear the limbs, roots, and other vegetation from the trail. Please make any contributions payable to Troop 401, and send them to Ashton Klepko 596 Leon Road, Shirley, AR 72153. You may also contact him at 501-412-1797 for any questions regarding the project. If there is any excess money, it will be returned to you or it may be donated to the Boy Scouts.

Ashton is very excited about this project and is looking forward to working with the many wonderful volunteers of our beautiful community to achieve this much needed project.

Thank you for all of your support.