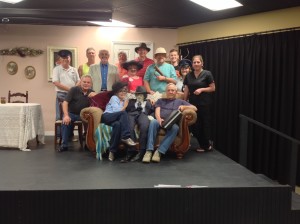 Arsenic and Old Lace is a play written by American Playwright Joseph Kesselring in 1939. It opened on Broadway in 1941 and had a three year run with more than 1,400 performances. It became best known through the 1944 film starring Cary Grant and directed by Frank Capra. The play is a farcical black comedy revolving around the Brewster family, composed of insane homicidal maniacs. The hero, Mortimer Brewster, is a drama critic who must deal with his crazy family.
Our local theater group, Our Towne Productions, will be presenting their version of this old favorite in six performances, starting June 20 at the Performing Arts Theater in the Fairfield Bay Conference Center. Other performances are June 21 (matinee and evening performance), June 22, June 26 and June 27. Tickets are $15 each and can be purchased at the Conference Center or at the door.