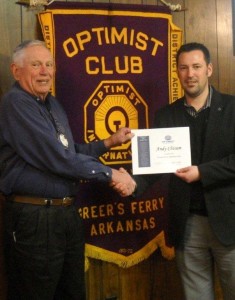 The Greers Ferry Optimist Club has announced the addition of Andy Chisum as a new member of the club on February 17, 2014.
Wayne Slaughter, Vice President of the Optimist Club introduced Mr. Chisum and said, “Andy became the Superintendent of the West Side School District in 2013 and has already proven to be a great asset to the school and community. He has a contagious positive attitude that carries over to everything he does and we look forward to the contributions he will make to our club.”
Volunteers join Optimist Clubs to conduct positive service projects in their communities aimed at providing a helping hand to youth. With their upbeat attitude, Optimist Club members help empower young people to be the best that they can be.
The Greers Ferry Optimist Club has been active in the Greers Ferry community since 1972 and is dedicated to “Bringing Out the Best in Kids”. Current programs and service projects implemented by the Optimist Club in Greers Ferry include: Scholarships, High School Essay and Oratorical Contests, Elementary School Service Awards, Weekly Student Tutoring, Annual Easter Egg Hunt, Christmas with Santa, and the Labor Day Rummage Sale that raises funds to offset the costs of these programs and events.
Additional information about the Greers Ferry Optimist Club may be obtained by contacting Wayne Slaughter at 501-206-1412.