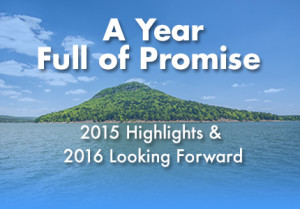 “We have so much to be thankful for here at Fairfield Bay. The accomplishments we attain are because this community really comes together and works as one. Congratulations on the fantastic accomplishments of 2015 and all the great things to come in 2016. It’s going to be another banner year.”

2015 Highlights
Growth & Expansion
• NEW COOL POOL CAFE opened to rave reviews only 6 months after a fire that destroyed the BayView Racquet Club.
• NEW VETERAN’S FISHING BARGE – Dedicated in honor of our veterans and built through the volunteer efforts of the city, the barge seats 64 and is available for rent at the Fairfield Bay Marina.
• NEW EXERCISE EQUIPMENT installed on the Rambling Cove Trail.
• FAIRFIELD LANES – Remodeled and reopened
• 2 NEW FESTIVALS – BayFest and Paddle Battle (both in September)
• FIRST DISC GOLF TOURNAMENT – Disc golfers from across the country came to Woodland Mead Park to participate.
• 29 MILES OF RESURFACED ROADS