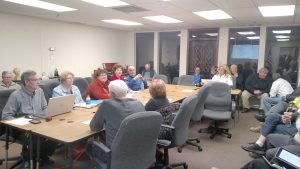 The Fairfield Bay City Council approved the fiscal year 2018 budget at their November 13 meeting. The 2018 budget is $2,176,000 which is $13,000 more than the fiscal year 2017 budget. Mayor Paul Wellenberger stated the 2018 budget was very conservative in projecting revenues for 2018. If all goes as anticipated actual 2018 revenues could be substantially higher. Included in the budget was a 2% increase in salaries for City employee’s.
In other business John Foster was appointed as the Councilperson for Ward 3 to serve out the term of former Councilperson Mike Shamoon who resigned due to work conflicts. John previously represented Ward 3 on the City Council..
Mayor Wellenberger report the Bank, considering the loan for the Hotel, is reviewing the recently completed commercial property appraisal of the new Hotel. In the interim the Construction agreements are being worked on. He remains very optimistic that the loan closing will be completed soon. Interest in 2018 conferences has increased due to the possibility of the hotel being built here Sales tax revenues collected in October were the highest October receipts ever collected in Fairfield Bay.
EMS Captain Andre Notz reported they had another record monthly number of ambulance calls on October with 68 requests for the ambulance. She also reported that, year to date, they have had 659 calls for the ambulance, which is on pace to set yet another annual a record. While they are still in need of additional volunteers, Captain Notz reported they were able to staff two ambulances about half the days in October.
Police Chief Burnett reported his staff had an exceptionally busy month in October including 12 felony arrests. He stated several arrest warrants are currently pending judge approvals.
Chief Burnett stated they took in 40 pounds of drugs during the drug turn in program. He further stated that his staff is now putting together holiday food baskets for elderly shut-ins.
Mayor Wellenburger reported that numerous visiting ATV trail users have been staying in the camp grounds and dining at our local restaurants. He also reported that he will be meeting with SKYFNET staff to review their current plans to enhance and expand high speed internet service within Fairfield Bay. He also reported that the City received a $53,000 grant to extend the sidewalk along Dave Parkway between the Chelsea Condo’s and the Indian Rock Nursing home
Seven new home permits were reported to have been issued in 2017to date. This is most new home permits issued in any year since 2010. In addition, all five condemned mobile homes have been removed.
The Imagine Fairfield Bay 2035 Committee is considering perusing a county wide vote on becoming a “wet county” They will meet with Saline County advocates who were able to obtain their wet election issue passed, despite a very well coordinated and funded opposition group.
The City Council was reminded that the annual combined City/Community club Town Hall meeting will be held December 5th at 3PM at the Conference Center .